Who would have thought I would ever write a blog about Canadian Geese? (you may call them Canada Geese more properly, but I’ll stick with what I know)

This is about mourning for a friend.

We moved to our dream home a year ago; a small house on a beautiful big lot bisected by a creek. The house needed much repair,but the setting is a dream. Along with our new home came a plethora of wildlife to watch, interact with and learn about. Two Canadian geese were among them.

The first spring we watched them nest, hatch and fiercely protect a passel of fluffy yellow little goslings. We were enchanted. We watched their devotion to each other and were reminded that these birds mate for life. So this spring I watched with anticipation as they returned- announcing their return with loud trumpeting.

The couple looked about the place, reminding themselves of where things were, and then began to build a nest in the middle of the stream on a small island. Oh no! That island flooded out totally during heavy rainfall. I walked down the hill to speak to them about it. Mrs and Mr Goose, this is not the place to build! Please chose another spot, on the bank, ok? They ignored me. I hoped for the best. The next day, April 1st, the Mrs laid her eggs and the vigil began. Geese eggs take about 25- 30 days to hatch. That night it snowed.

The pair sat through snow and rain, high winds, switching off and taking turns to eat and sleep; they slept in the middle of the stream on one leg. Some goose was always keeping those eggs warm. This has been a very cool spring. I found their devotion to be endearing.

Then the weather really threatened. Heavy rains were predicted for the 15th of April. I worried so about them, and woke early to check. Sure enough, torrential rains had fallen all night, and the stream was flooding. At 6 am the island was only barely above flood waters and rising. 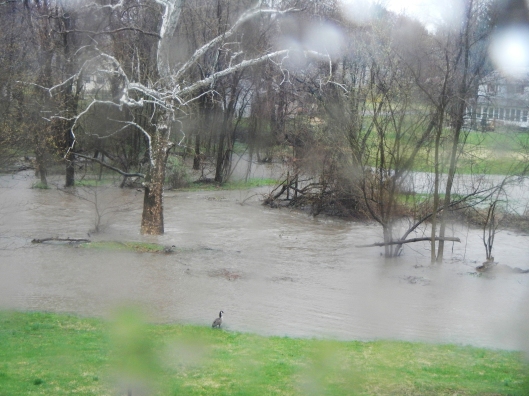 And there sat Mrs Goose, holding on for as long as she could to her spot on the nest…until she could not. The next time I looked the island and nest were submerged. She and her mate stood on the edge of the flood and watched, and waited.

At 11 am and three and a half inches later the rains slowed to a drizzle and the floods began to recede. The gooses moved a bit closer. At time Mr Goose would raise his big wings and flap, honking loudly all the goose curses he knew at the flood waters, at the fates. They were obviously so upset.

They waited and watched again. 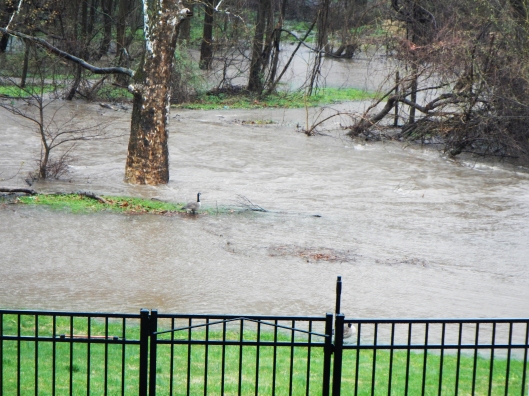 The island slowly emerged and Mrs Goose went right to work. She began to dig with her beak. The big bird covered every inch of the island as it emerged, over and over, digging holes. Then she swam about the island submerging her head to look into the rushing waters.

The geese searched for hours. To no avail. Their eggs had been swept away. Next the Mrs dug a shallow hole and laid down in it, with nothing in it. She arranged her feathers just as she had on her real nest. Mr Goose walked around and looked upset. Occasionally one or the other would honk loudly, in pain and frustration I think. This must be how geese mourn. 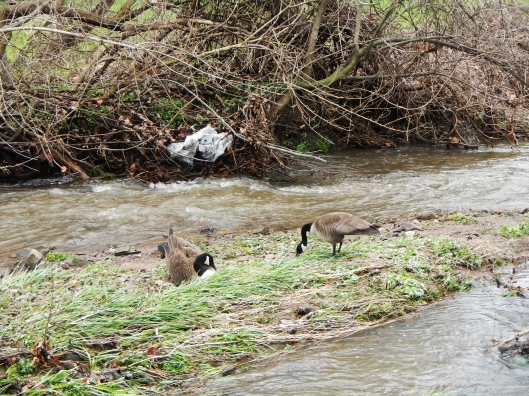 Eventually they both left. They returned many times and dug and dove some more. As they frantically searched their island their pain traveled up the hillside to me. Geese flying overhead honked down in sympathy. It was a dreadful day for them. Me too. About 7:00 pm tonight they finally left again.

So I am writing this for them, my unlikely friends, in sorrow for their loss. Though they are only birds, they suffered today, and I am sorry my friends.

2 thoughts on “For my Canadian Geese Friends”

Throughout Patricia's adult life she has been painting and enjoying presenting images of the world as seen and imagined. The paintings you see these blog are frequently textural, suggesting multiple layers of images through time. Ancient scenes, structures, people from long ago, and other realms weave through many of these paintings.

Art for Sale
My Shops have an assortment of unique contemporary Watercolor and Mixed Media Art Gifts for your Home or Office. These products also make great Gifts for your family and friends.
Please take a look at the on line painting galleries. Contact me if there is a painting that you would like to see as a poster, card, T-Shirt, or other Zazzle product.

For contact info please go to the "ABOUT" page